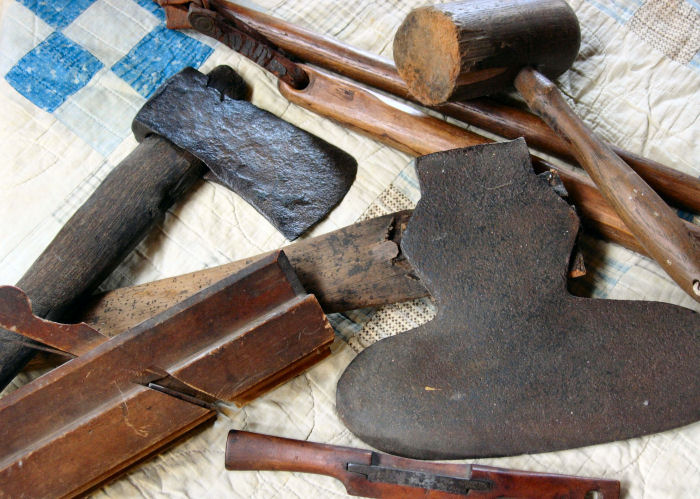 This section includes the names of occupations, professions and offices in which our Colonial ancestors engaged. Some of them are the names of occupations, professions or offices in which their Medieval ancestors engaged. Despite the fact that some of them may have been popular during the centuries prior to the Colonial Period, most of them continued to be undertaken into the Victorian Age and the advent of the Industrial Revolution. In fact, many of the occupations included here are being engaged in to the present time. Brief descriptions are included with each occupation.

It should be noted that many of the names included in this list were not so much the names of occupations, but rather the names of jobs and skills employed by craftsmen prior to the Industrial Revolution. As such, some craftsmen, such as a blacksmith would also be a farrier by engaging in the job of attaching an iron shoe to a horse's hoof. In cases such as this, I have attempted to note the connection between the various names.

Many of the websites that display names of archaic occupations appear to be as much interested in simply increasing the 'number' of names as they are in providing useful information. To that end, they include names which are not actually occupations, but rather names of the participant(s) who happen to find themselves in a particular social situation or a one-time, infrequent event. A website I visited recently bragged about having "well over two thousand entries". Two of those entries were executor and executrix: the man or woman who managed a deceased loved one's estate. I really doubt that anyone has ever made being an executor or executrix their occupation! Who in their right mind would want that as an occupation? It would require that you have loved ones dying all the time, in order for you to work at your 'occupation'. Other entries on that same website consisted of simply adding the names worker or maker after the name of an article. I'm sure that someone made a teacup and the saucer on which it sat, but I really doubt that the person who particiated in the manufacture of those items went by the name of teacup-maker or teacup-saucer-worker. I found another entry, which tends to be identical on all of the websites: indentured servant, which was not an occupation, but a situation in which one had to enter to pay off some debt. A person would not have engaged in higher learning in order to make indentured servant his profession, nor were there any craftsmen who taught their apprentices to become indentured servants by practicing the "artifice" of indentured servitude. One might assume, then, that to become an indentured servant would have been moreso a situation, but it would have been an infrequent, temporary situation in which to find oneself. I have attempted to refrain from making my list large by the addition of such words by simply taking the time to look at each and every name I have included, rather than mindlessly copying other websites' lists.

Certain websites contain lists of occupations devoted to a particular occupation, such as coal-miner. Their lists are chockfull of the names of individual aspects, or job duties, of that particular occupation, making them very impressive in their size ~ but not very interesting to the casual visitor. I worked for a number of years at a papermill, where some job duties were given the names of beaterman, second-helper, mixer-man, and technician. While the knowledge of the names of all the different job duties at the papermill would be of great interest to fellow papermakers, this website is not devoted exclusively to papermaking; so I have refrained from including many of the names of such occupation-job duties.

I have included some names which are clearly those of a vocation rather than occupation; this would include many clergical positions, such as parson and pardoner. I chose to include such names because although not necessarily obtaining payment for his/her services, the vocation would still have been how he/she occupied their life. I have similarly included the names of 'military' positions because, despite the fact that many men who joined the military did so because they were compelled to, there were some who chose it as a 'career', making it their occupation.

It should also be noted that many of the occupations included here would have been those employed in the British Isles and the American Colonies. Sprinkled throughout many website's lists of archaic occupations are names which are simply the Latin or French forms of the one(s) with which we are familiar, such as "clericus", which is simply the Latin for "clerk" or "combere", which is simply the French for "comber" (as in wool comber). I have included only such names which appear in the New Law Dictionary, by Giles Jacob, published in 1744.

And lastly, I want to note where my information came from. I am sure that I am not wrong in assuming that 99% of the websites which include a listing of archaic occupations have simply copied their information from other websites. It is amusing to see the exact same definitions on every website you visit. I admit that when I started my listing, I also looked at other websites so that I'd have a starting point. Then I went to my personal library of printed sources in order to get my own definitions. My primary source for the definitions of the occupational names was the Oxford English Dictionary. The OED is not only one of the definitive sources for word definitions, but it also provides etymological information for the words. Direct quotations from that reference source are underlined. (Note: Entries which contain only the phrase: "A variation in the spelling of the name: -----" also come from the OED.) I have referenced some of the words to An Universal Etymological English Dictionary dated 1789; those definitions being followed by [UEED]. Additionally, where appropriate, other published sources for names are noted (including the New Law Dictionary published in 1744 as noted previously). The definitions for the remainder of the occupational names, being unconfirmed by any published authority such as the OED, may or may not be correct. I have included them because they might be correct, and I would want to avoid omitting any that might be appropriate for inclusion.