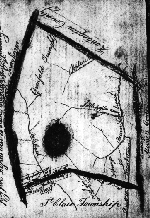 Because of the treaties with the Indians that held the lands on the western shore of the Susquehanna River, the western boundary of Lancaster County originally extended only to the east shore of that river. With the influx of Euro-American settlers, first a small group of Germans who were not acquianted with the Indian treaties, and then a group of people from the colony of Maryland who wanted to claim the lands for that colony, the County of Lancaster was given legal claim to those lands west of the Susquehanna River in the 1740s. In 1749 the County of York was erected out of those western lands; on its creation, York County’s westernmost boundary was fixed along the ridge of the South Mountain range. In the following year of 1750, the County of Cumberland was erected out of what was legally the remainder of Lancaster County to the west. This new county’s western boundary was undefined, extending to the limits of the Province of Pennsylvania – a somewhat undefined area. (Many historians have erroneously claimed that the western boundary at that time existed as the same boundary line at the present time, but the Indians did not given up the lands to the west of the Tuscarora Mountain range until they signed the Treaty of Albany in 1754.)

Twenty years went by with a steady movement of settlers into Cumberland County and beyond the Tuscarora Mountain. In the year 1771 the County of Bedford was created from the area known as the Township of Bedford within Cumberland County; it was named for the Duke of Bedford. The boundaries of this new county stretched out over a large area to include what is today encompassed by Bedford, Blair, Cambria, Fulton, Huntingdon and Somerset Counties and a small portion of Centre County. As soon as it was erected as a county, Bedford was divided into its own townships. The township that retained the name of Bedford extended from the vicinity of the present-day town of Osterburg northward to roughly the middle of present-day Blair County. To the north and east of Bedford lay Barree Township.

The portion of the original Woodberry Township which lay to the west of Dunnings Mountain was named Greenfield. This is the area of Old~Greenfield, which was further partitioned into Freedom, Greenfield and Juniata Townships in Blair County, when it was erected in 1846, and Kimmel and Pavia (formerly Union) Townships in Bedford County. It is this area to which the Old~Greenfield Township Historical Society has turned its attention.

The accompanying illustration is a reproduction of the survey of Greenfield Township which was filed in the Bedford County Court of Quarter Sessions in November, 1798. The solid black circle represents the Blue Knob mountain.