What we know of the Indian tribes that inhabited the south central region of what is today Pennsylvania comes from the historic period. In other wordss, the pre historic period isrevealed to us only through the remains left behind by those first sojourners in this land. Archaeological discoveries have provided some clues, and a few answers here and there, as to how those first sojourners might have lived and carried out the activities of their daily lives. But the pottery and stone tool evidence left often cannot tell us everything about the people themselves, how they interacted socially, and how they viewed their place in the grand scheme of life. The very definition of the term pre historic means that it was during a time before the history could be documented in some way. This website is an historic means of documenting this region's past. That documentation is accomplished by means of the vehicle of language embodied in the written word. In the prehistoric period of time the sojourners of this land may have possessed language, but they did not possess the vehicle of writing to record their communications. Any accounts of that pre historic period would have had to have been passed to us by the documentation of oral traditions at some time in the historic period, perhaps centuries removed from the actual event being recounted. The reader must therefore keep in mind the fact that the customs and social patterns discussed in the following may not have been in existence from time immemorial, but instead might have existed only during the past four or five centuries.

Kinship in Indian societies during the historic period was unilateral. How each individual within a tribe was related to (and therefore behaved toward) every other individual within that same tribe depended upon the type of kinship system the tribe adhered to. There were two different kinship systems in the Indian world. Both systems were considered exogamous in that the lineal descent was determined through only one parent. The farming tribes tended to be matrilineal with lineage through the females. This was based on the fact that the duties of farming and raising the primary sustenance of the family was accomplished by the females. The females owned the land and houses and maintained the integrity of the tribe while the males were engaged in hunting, fishing, warring or parleying with other tribes. The males of such a matrilineal society might hunt for food, but the product of their hunting was not the family's primary food source. The other system, known as patrilineal, was based on the fact that the males provided the primary food source for the family through their hunting. The patrilineal tribes tended to be distinctly nomadic. The males owned the tools for hunting and the lands on which they hunted. The females simply cared for the infants and young in the absence of the males. As with any complex network of individuals, any single tribe might encompass varying degrees of both lineal systems. The eastern tribes were predominantly farming tribes, and hence, matrilineal.

The Susquehannocks, which will be noted to have been the predominant tribe to inhabit the region drained by the Susquehanna River and its tributaries east of the Allegheny Mountain range, were considered to be a basically matrilineal society. Therefore, we will concentrate on that system of kinship for purposes of this study.

The matrilineal system of tribal lineage entailed that inheritance and sachem succession descended through the female lines and crossed over to males only if there were no females to continue the line. Inheritance, in the form of property was passed from mother to daughter. If a female had no daughters, her inheritance was passed on to a sister's daughter. Although the tribal leader was invariably a male, in a matrilineal system the succession of the tribal chief, or sachem, did not pass to his son. Instead it passed from the dying tribal sachem to some close relative of his mother's genetic descendants. That might mean another son of the mother (i.e. the dying sachem's brother) or a son of his sister (i.e. his nephew). According to a letter written in 1721 by Father Pierre de Charlevoix while on a trip through the North American Continent, the dignity of acquiring the leadership role of chief of the tribe was hereditary. He noted that

"…the succession is continued through the women, so that at the death of a chief, it is not his own, but his sister's son who succeeds him, or in default of which, his nearest relation in the female line. When the whole branch happens to be extinct, the noblest matron of the tribe or in the nation chuses the person she approves of most, and declares him chief."

In a matrilineal system the male moved from his parent's lodge or tribal community when he married. The newly wedded couple would live with the female's parents for a specific period of time, normally a year, at the end of which the couple would choose which family they wished to continue to reside among. The couple, more often than not, would remain with the female's family. The male retained his status within the tribe, but the female was recognized as the head of their particular household.

Apart from marriage, a male did not have the right to change his affiliation with his own lineal tribe. He might, though, be chosen for adoption by another tribe; usually being claimed as a son by a female whose own son had been killed. If such was the case the male Indian was wholly and unconditionally taken into and became a member of that tribe. Although this crossing over from one tribe to another happened rarely, it was possible. Adoption of males by a tribe other than their birth family most often occurred when prisoners were taken in battle. Prisoners from one tribe were seldom mistreated by captors from another tribe. They were more valuable alive and assimilated into the victorious tribe than if they were dead.

The historical record abounds with tales of whole tribes being assimilated into another tribe when taken prisoner with the result of the defeated tribe's identity being lost forever. Cadwallader Colden stated, in his book published in 1727, History Of The Five Indian Nations, that the Iroquois would

"save the children and young men of the people they conquer, to adopt them into their own Nation, and to educate them as their own children, without distinction; these young people soon forget their own country and nation; and by this policy the Five Nations make up the losses which their nation suffers by the people they lose in war."

In the book, Chronicle Of The Indian Wars, a statement by modern Indian scholar, Francis Jennings, notes that by 1668 at least two-thirds of the Oneida peoples (one of the confederated Iroquois nations) were "fully assimilated Algonquins and Hurons".

It should also be noted that because of the somewhat nomadic customs of all Indians large (and therefore unmanageable) families were not a benefit to the tribe. There simply didn't exist the same desire to "go forth and multiply" within the Indian peoples that motivated the Europeans to give birth to as many children as possible. The Europeans tended to stay in one place for the duration of their lives and numerous offspring were needed to work the land and ensure continual productivity and survival. The nomadic Indian did not require many offspring to ensure their survival. Hunting was not as labor intensive as agriculture. Numerous offspring for the Indian tended to slow the nomadic pace and could threaten their survival in a sense by inhibiting the free movement of following animal herds. It likewise should be noted that when an Indian couple chose to part there was no need for formalities, the couple simply parted company. In such situations the female always kept the children.

The tribe existed as an extended family not only in the structure of how the members were actually related but in how it functioned as a community. Everyone knew their own and each other's place within the community. There rarely were disputes within the tribe because every member was raised from infancy to understand and respect the order dictated by lineage and descent. That tribal or family aspect of the Indian way of life is what was so often confusing and a problem for the Europeans. The Europeans and their descendants simply did not, in many instances, understand the Indian customs. What appeared as barbaric and uncivilised to the Europeans (e.g. the casual acceptance by prisoners in battle to be adopted into another tribe or the polygamous manner of one male taking more than one mate) was really only a sensible and logical response to the demands of the semi-nomadic way of life the Indians led. 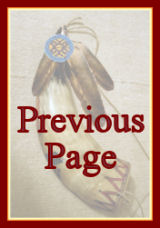 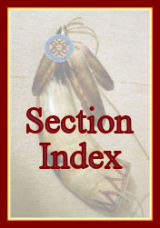 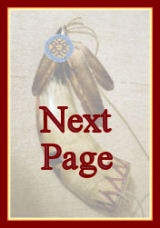