Fort Bedford was one of three forts built by the British during Forbes' Campaign. Fort Bedford was constructed in the summer of 1758 in the form of an irregular pentagon with five bastions.

A letter written by a soldier in General Forbes' army on 24 June 1758 from the "Camp At Race town" has been discovered. Click on the following link to access a page devoted to this letter.

Fort Bedford is the only one of the six fortified structures known to have been constructed within the limits of present-day Bedford County during the American Revolutionary War period to be represented by a museum. 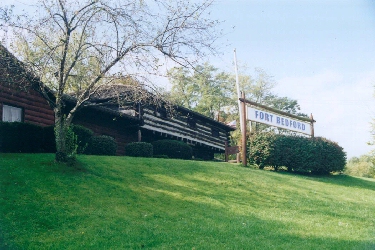 A Brief History Of Fort Bedford

The most notable of the few fortifications to be found in the region encompassed by the present day county of Bedford was Fort Bedford. The French and Indian War was only three years in progress when John Forbes was commissioned as a Brigadier General to command the British forces in the "southern provinces" of America. His objective was to capture Fort Du Quense, which General Braddock had failed to do only three years prior. Forbes was ill, but his army was led in the field by Colonel Henry Bouquet. In the summer of 1758 Bouquet began his push westward from Carlisle in the south central portion of the province of Pennsylvania.

Late in July of 1758 Colonel Bouquet commenced work on two major projects, the cutting of a road from Carlisle to the trading post known as Ray's Town and continued westward to Fort DuQuense, and the erection of a fortification to function as a base of operations for the British forces and as a supply depot. Approximately twenty-five hundred of his men were employed in the construction of the stockade. A dispatch dated 13 August, 1759 mentioned the fort, therefore it may be assumed to have been completed by that time.

Fort Bedford was composed of a number of buildings spread out over an acre and a half and enclosed within a vertical log stockade wall. The layout of the fort was that of a five pointed star with bastions extending from each corner. The fort was situated on the south side of the Juniata River at the crest of the hill that slopes steeply down to the edge of the water. The south side of the irregularly shaped stockade, in which the main gate was no doubt placed (so as to face the Commandant's House), would have been situated directly on what is today Pitt Street. There would have been a gate facing the river with an adjoining stockade protected stairway leading down to the river.

A V-shaped ditch, being four to five feet deep and about three feet wide at the top, was dug around the entire fort perimeter. While the ditch was being dug by part of the troops, some of the others were employed at cutting down trees, preferably oak, in the surrounding forests. Logs about eighteen feet in length were needed to be cut and hewn flat on two sides to fit snugly together. The logs were then placed upright in the ditch side by side. It has been estimated that the fort's stockade wall would have required at least 2,000 such logs. As the logs were held in place the ground that had been excavated from the ditch was pushed back in against the upright logs' bases and tamped down tight. The logs might have been lashed together at the top also, but the available evidence does not note if that was the case at Fort Bedford. Following the completion of the wall, a platform perhaps only six feet wide was constructed against the inside of the wall, running roughly the entire length of the enclosing stockade. This platform would have been perhaps four to five feet off the ground. The platform would allow the fort's garrison to have an elevated vantage point over any attackers through loopholes cut between the logs at points between ten and twelve feet above the exterior ground level. The layout and structure of this fort was no different than any other contemporary fortified structure. The idea was to make the wall impregnable from the outside, but easily defended from the inside.

There was no town in the vicinity at the time that Forbes' army moved in to build their supply and staging base. The only known residents were John Wray (variously Ray), the Indian trader who is believed to have constructed two or three log buildings in which to carry on his trading activities, and another trader, Garrett Pendergrass, Sr who, like Wray, was not a permanent settler of the region. Both traders are believed to have left the region soon after Forbes' Army's arrival. A third settler, William Fredregill, was noted, in a Memorial to the Commissioners of Property of the Province of Pennsylvania from John Ormsby, to have settled in the same vicinity in the year 1755, but that he was forced to move by Indian attacks in the year 1757, and that his property and improvements had been incorporated into the Proprietary Manor of Bedford. In any case, the region was largely unsettled prior to the arrival of Forbes and his army of Scottish Highlanders, Royal Americans and Pennsylvanian and Virginian militia.

A draught of the fort drawn in October, 1761 by John Lukens showed that the fort was not the only structure built by Forbes' troops. A large "Commandant's House" was constructed just to the southeast of the fort stockade and across the road that was being extended westward. The Commandant's House, also known as the "King's House" would have served as barracks and mess hall for the army's commissioned officers. Close to the Commandant's House, and located near what is currently the southeast corner of the intersection of Pitt and Julianna Streets was the powder magazine for Fort Bedford. It was customary, and quite prudent, to locate the powder magazine outside of, but near enough to the fort so that it would not cause direct damage if struck and exploded by the enemy, while still being easily accessible to the fort. The map also shows what is captioned as Houses Built by Sutlers who followed the Army located to the south and west of the stockade. Although no vestiges of these original log structures remain to the present time, they were the start of the town that eventually would become a county seat. The word "sutler" referred to traders who sold provisions to the soldiers. The records reveal that Forbes' army included nearly a thousand "wagoners", which might have refered to civilians who accompanied the army and performed many tasks on which the army could not expend their time and energies.

Fort Bedford was used primarily as a garrisoned supply depot until the close of the French and Indian War in 1763. Along with the Treaty of Paris which ended the war on 10 February, 1763 the British Board of Trade issued a policy that stipulated, among its other articles, that the English would refrain from expanding their settlements west of the Alleghenies. The Treaty of Easton, signed in October, of 1758 between the Provincial Government of Pennsylvania and the Indian tribes west of the Alleghenies had called for the banning of white settlements in that region, but the fall of Fort Duquense on 24 November of that same year had resulted in an influx of white settlers. The 1763 policy, prepared by Lord Shelburne, the head of the Board of Trade succeeded no better in stopping white settlement than the 1758 one had. Fort Bedford, being the last military outpost of the British east of the Alleghenies, became, following the French and Indian War, primarily a garrisoned stopping point for settlers moving west into the forbidden zone. It became moreso a symbol of the edge of the frontier. As a fortification, the structure served its purpose of sheltering the settlers of the adjoining town and region, but it saw little action in its later years.

Fort Bedford was evacuated by the British Army in the year 1766 with the conclusion of Pontiac's Rebellion. A fictitious folktale, though was started by James Smith. In his autobiography, he claimed that Fort Bedford became, in 1769, the first British fort to be attacked and captured by American rebels caught up in the spirit of independence. Click on the following icon to go to a page devoted to the Black Boys' Raid.

That folktale has been proven to be untrue by a petition from Garrett Pendergrass in 1766 asking the Pennsylvania General Assembly for recompense for his lands which had been taken for the construction of Fort Bedford. In that petition, Pendergrass stated that "since the King's troops evacuated that Fort...", so only local militia or men working for the Bedford Township, Cumberland County Justice of the Peace would have been at the fort in 1769.

Because of the fact that Fort Bedford was abandoned by British troops in 1766 before the start of the Revolutionary War period, it would have been garrisoned by Bedford County Militia during that War. The structure itself was permitted to decay and fall into ruin. It was still used, albeit in a decaying condition, by the local settlers possibly into the late-1780s for their own protection. The records of the Whiskey Rebellion do not make mention of the fort, so it might be assumed to have been practically or totally deteriorated by the early 1790s.

To reach the park:

(From I-99) Turn off I-99 at the Bedford Exit, and follow Business Route 220 southward to the Borough of Bedford. At the intersection of Route 220 (Richard Street in the borough) and Pitt Street, turn right. Travel one block and turn right onto Fort Bedford Drive.