The earliest Euro-American residents of Bedford County, Pennsylvania were a mixture of emigrants from Germany, Ulster (Northern Ireland), Scotland and England. Bedford County was part of the frontier then. The Indians of the Iroquois Confederacy, whose primary settlements were located in the Mohawk Valley in the present-day state of New York, used this region as a migration corridor between the Mohawk Valley and the Carolinas. The homesteading of the Euro-American settlers in this region disrupted the Indians' long established migration routes. As a result, they mounted incursions against the settlers.

Mother Bedford's Euro-American residents were more concerned with safeguarding themselves from the Indian attacks than with worrying whether the taxes imposed by the British Parliament were just and lawful. But when word was received that the other American colonies were being distressed by the restrictive and coercive Acts of the British Parliament, and the Province of Pennsylvania was considering actions to stand in unity with them, there were a number of residents of Bedford County who were likewise in agreement.

Bedford County was erected in 1771, just a few years before the colonies united to declare their independence from Great Britain. Despite her distance from the eastern seaboard, where the predominantly English residents had time to be concerned about the doings of the British Parliament, Mother Bedford sided with the Patriot Cause.

There were some residents of Bedford County who were not in agreement with the Patriot Cause. A group of the Loyalist and Tories got the idea, in the spring of 1778, to incite the Indians at Kittanning to attack the other Euro-Americans residing in Bedford County. Fortunately for the intended victims, the plot failed. Some of the Tories were killed by the Indians and the rest fled from the region, but a number of them were captured and dealt with. Every now and then they would assist the Indians in attacking the other Bedford County residents, but on the whole, Mother Bedford remained loyal to the Patriot Cause.

During the course of the war, only one incident was the result of direct British influence and participation. In the Spring of 1781 the British incited the Seneca Indians in New York to make an incursion into Bedford County in an attempt to disrupt communication lines between the east and Fort Pitt and the Ohio Valley. On 03 June, 1781 a detachment of Bedford County and Cumberland County Militia left Fort Fetter to investigate recent reports of sightings of Indians in the region. They were surprised by the Indians in the morning haze, and the Engagement of Frankstown resulted in the death, wounding and capture of a number of Bedford and Cumberland County men. Despite the British and Indian "victory" in this engagement, they never again attempted a similar incursion.

Through the course of the eight~year war, Bedford County supplied troops and supplies to the Patriot armies. Although she was not required to raise a company when the first call went out for troops to form a Rifle Battalion in 1775, Mother Bedford indeed raised a company. Despite being ravaged by the Indians, as were the other frontier counties, Mother Bedford supported the war effort as best as she could.

This website is dedicated to the memory of Mother Bedford during the American Revolutionary War, and to her native sons and daughters who defended her against the British and Indians. 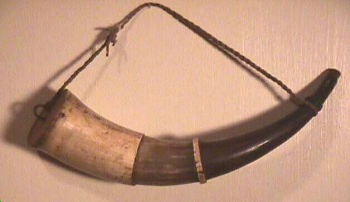 Powder horn used during the American Revolutionary War, in the collection of Larry D. Smith, the website owner, a native son of Mother Bedford, who is very proud to be a descendant of Jacob Schmitt, Sr who resided in Bedford County prior to the War, served in the Bedford County Militia as a Ranger on the Frontier, and died and was buried in Mother Bedford's soil after the War.