The Presentation Of The Flag

A letter from General John Forbes to William Denny, the Lieutenant-Governor of the Province of Pennsylvania, dated 22 October, 1758 at Raystown Camp included the following:

"I have received no Answer from you relating to Fort Duquense, if it should please God to grant Success; but whether that Fort is taken or not, the Forts of Loyal Hannon, Cumberland, Raystown, Juniata, Littleton, Loudoun, Frederick, Shippensburgh, and Carlisle, ought to be Garrisoned…" Rather than being named as Fort Raystown per se, the phrase "the Forts of" refers to the location.

In December 1758, a livestock trader, Adam Hoops, writing from this fort used the dateline: Fort Bedford on a letter.

On 13 August, 1759 a letter was sent by General John Stanwix to Governor Denny which was noted as having been sent from "Camp at Fort Bedford". General Stanwix's letter is often used as 'proof' that he personally bestowed the name on the fort. Those who advocate that seem to have not found Mr. Hoops' letter sent nearly a year before that of Stanwix.

The fort, therefore, was named at some time after 22 October, but prior to December, 1758. It was given the new name of "Bedford" in honor of John Russell, the fourth Duke of Bedford. John Russell served as Secretary of State in Great Britain during the 1750s. It is believed by local historians that at some time in 1758 or 1759, following the naming of the fort, the Duke of Bedford sent one of his flags to the garrison out of gratitude.

Despite the fact that it would seem (by the tradition stated by the local historians) that the Duke of Bedford was doing something unique and special by sending one of his flags, the flag that was sent to the new fortification on the frontier of Pennsylvania was a standard ensign utilized by the British for all of their land fortifications. It was known as the British Red Ensign and consisted of the British Union in the canton on a solid red field made of silk damask (meaning it has a repeating floral image woven into the fabric).

The image below is reproduced with the kind permission of representatives of the Fort Bedford Museum and Bedford Borough. 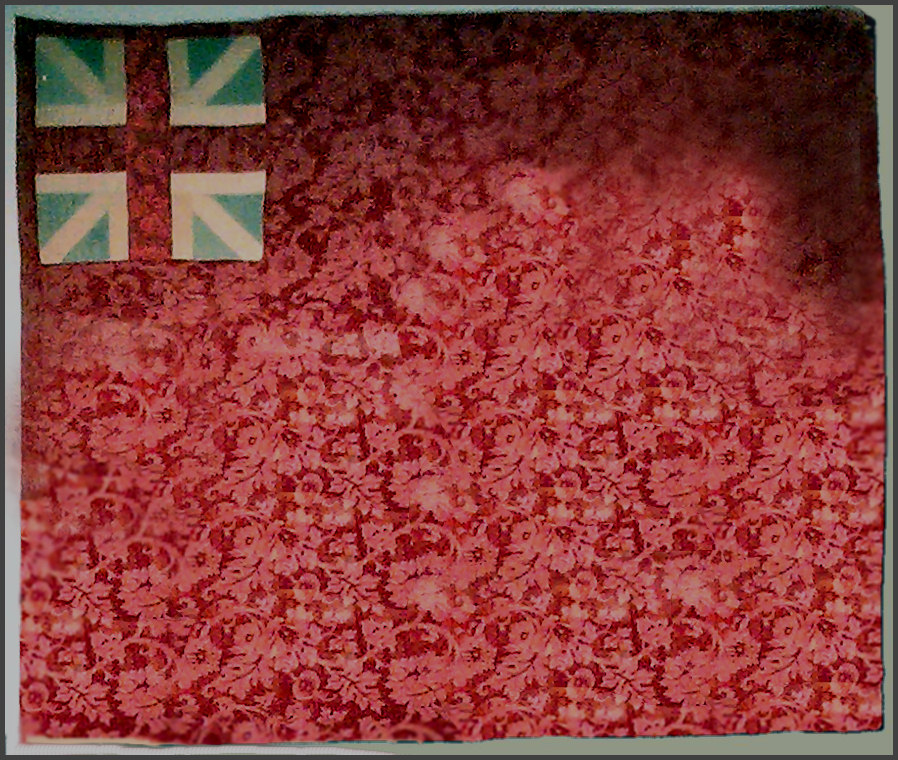 A Description Of The Flag

The following description of the construction of the Fort Bedford Flag is derived from an analysis of the artifact performed in the summer of 1998 by the Textile Preservation Associates, Inc., of Sharpsburg, Maryland.

The flag is constructed of red silk satin damask with a floral woven pattern. The flag measures seventy and one-half inches (70-1/2") on the leading edge and eighty and five-eighths inches (80-5/8") on the fly. The fly consists of two and one-half widths of the damask joined in horizontal, flat fell seams. An analysis of the artifact revealed that the fabric was probably produced with a loom width of approximately thirty inches (30"). The pieces were sewn together with two-ply, S-twist white and gold colored thread. Both hems, of the top and bottom of the fly, are rolled, and indicative of the time period in which it was produced, hand stitched. The hems were produced by rolling the material over twice, then sewing them with two-ply, S-twist white silk thread. The leading edge has a 2" pole sleeve. The leading edge had been rolled around to the obverse side, the edge was rolled under, and then it was stitched with two-ply, S-twist red colored thread. Two grommets are sewn at the top, one on the front and the other at the back. The fly end is frayed to form a fringe measuring 1-3/4".

The "Union Jack" canton, located in the top, left corner, is constructed of plain woven, light blue (faded to green) and white silk. The canton measures twenty three inches (23") by twenty-four inches (24"). The various pieces were sewn together on the seams with two-ply, S-twist red and white silk thread. The red damask fabric was cut out and the union jack was then inserted and attached to the fly around the perimeters with a flat felled seam. The union jack was sewn first to the reverse of the fly, then the seam selvages were turned under on the obverse and whip-stitched with two-ply, S-twist red and white silk thread.

The dye used in the fabric was determined to be a natural mordanted dye, most probably cochineal.

The Present Condition Of The Flag

At the present time, the flag is intact and in good condition considering its age and the fact that until only a few years ago, it had not been removed from damaging environmental elements, such as light. The fabrics are strong. There is little evidence of fading apart from the slight fading of the blue dyed fabric in the union jack canton. There is also some water staining. Only a few tears in the fabric are present. It is torn for a length of four inches (4") at the top of the pole sleeve. A small tear exists in the diagonal white arm of the leading edge quadrant of the canton. Also a four inch (4") vertical tear exists in the triangle adjacent to the leading edge of the green fabric in the canton. Approximately one inch (1") of the fabric is missing at the corner of the top of the fly end. In regard to creases, there are three horizontal creases across the fly due to the fact that the flag was folded for a period of time.

At the present time, the Fort Bedford Flag is framed in a protective climate-controlled case and kept out of direct light in order to further preserve it. Access to it is restricted for obvious security and preservation reasons. It is usually on display at the Fort Bedford Museum from Memorial Day through the Fall Foliage Festival (the second week in October).

A Provenance Of The Fort Bedford Flag

Whether the Fort Bedford Flag was ever actually flown at Fort Bedford cannot be known because of a scarcity of records on the matter. According to popular tradition, the flag was removed from Fort Bedford by a group of young men shortly after the Declaration of Independence was signed.

The flag, according to a letter written on 21 October, 1922 by John M. Reynolds to Dr. Thomas L. Montgomery, the Librarian of the Historical Society of Pennsylvania, was taken from the fort by Anthony Stiffler. It was kept in the possession of the descendants of Anthony Stiffler and traced to Hugh D. Moore, one of those descendants residing in Nebraska in the early 1900s. R. Ewing Stiffler, a family historian, claimed in the 1940s that he received a letter from a man residing in Bedford which stated that the flag had been in the possession of Elizabeth Catherine (Claar) Stiffler. This Elizabeth was the wife of (Jacob) Anthony Stiffler. A problem with this information is that there was no man by the name of Anthony Stiffler in Bedford County prior to or at the time of the American Revolutionary War. (In fact, this website's owner, Larry D. Smith, is a descendant from Bedford County early settler, Jacob Stifler, and has researched the Stifler line from both Jacob and Peter, his brother; the only "Anthony" found to be a member of the Stifler/Stiffler families that settled in Bedford County was Jacob Anthony Stiffler who was born after the period of the American Revolutionary War.)

Family traditions of the Nawgel family of Bedford County claim that the flag was actually taken from the fort, not by a man by the name of Anthony Stiffler, but their ancestor, Anthony Nawgel. A man by the name of Anthony Naugel resided in Bedford County during the American Revolutionary War and served in Captain Samuel Davidson's Company of Bedford County Associators in 1776. According to a letter sent by Mrs. W.H. Beegle of Gettysburg, Pennsylvania to the editor of the Bedford Gazette, the flag was taken from the fort by Anthony Nawgel, who kept and proudly displayed it at his inn, the Nawgel Tavern. Anthony Nawgel's daughter married Hugh Moore, and the flag eventually passed into the possession of the Moore family.

R. Ewing Stiffler attempted to track down the flag in the 1940s. He traveled from his home in Denver, Colorado to visit Mrs. Annie (Moore) Jensen at Sidney, Nebraska. According to Mrs. Jensen, she had seen the flag when it was in the possession of her grandmother, Mrs. (Jacob) Anthony Stiffler. Mrs. Jensen claimed that her grandmother sold the flag to a stranger for fifty dollars. When the rest of the family found out about the sale, Hughey Moore, then Sheriff, pursued the purchaser and rebought the flag. It was then kept by the Moore family, rolled up in a linen towel. It eventually passed into the possession of Hugh D. Moore, who took it with him when he moved to Sidney, Nebraska. According to Mrs. Jensen, the flag was kept in safe-keeping in a bank at Pittsburgh, but the name of that institution is no longer available.

In 1944, the flag somehow came to be in the possession of Major Simon M. Lutz, founder and first president of the Pioneer Historical Society of Bedford County. Soon thereafter, M. Fred Sammel, a descendant of the Moore family took Mr. Lutz to court for custody of the flag. The Court ruled that the flag was to be placed in the custody of Mr. Sammel and the First National Bank of Bedford. The right was also awarded at that time to the citizens of Bedford to have the flag displayed for patriotic events and celebrations.

The flag made an appearance in public in 1958 when it was presented "ceremoniously" to the then-current Duke of Bedford. A reproduction was produced and flown during the 1958 celebration. The reproduction, of course, would later cause confusion over the identity of the actual artifact. The Fort Bedford Flag was once more displayed in public during a fall foliage festival in 1969.

In 1988 the Fort Bedford Flag was declared to be a "reproduction British flag" by the Fort Bedford Museum management. It was insured for a mere $200 and was displayed at the Museum tacked on a wall.

Ten years later, in the summer of 1998, the flag was sent by Larry W. Yantz, as curator of the Fort Bedford Museum and on behalf of the Bedford Borough Council to the attention of Fonda G. Thomsen, director of the Textile Preservation Associates, Inc. at Sharpsburg, Maryland. As a result of her analysis, Ms. Thomsen's conclusion was that the flag appeared to be the original 1758 construction and not a later reproduction. She also noted that the condition of the fabric suggested some, but not continuous, use. The creases evident in the fabric suggested that it had been folded for a long period of time in storage.